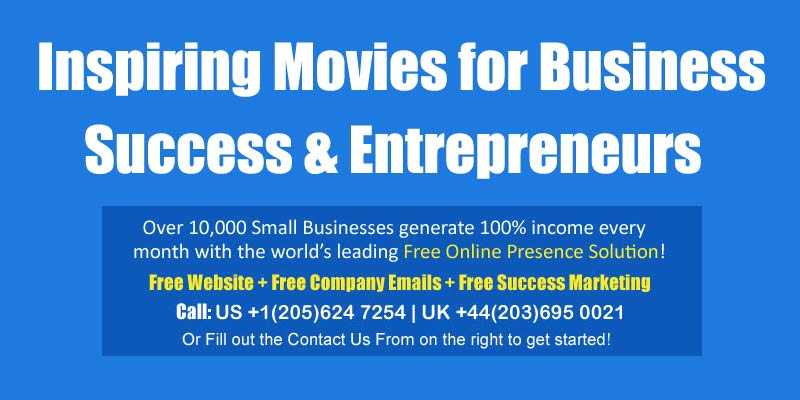 Are you looking to start a venture or have a great business idea but need some motivation to get started with a journey that can be rough but rewarding? We have compiled a list of inspiring movies for entrepreneurs that would help you in find motivation and teach you how to tackle business challenges.

Entrepreneurs and successful businessmen have one thing in common that they always keep enhancing their skills and abilities. With so much resources, technology, innovation around us, the opportunities to learn, improve and grow are greater than ever.

You may find reading books, newspapers or business magazines boring but documentaries and movies can’t be boring and they can be a great source of inspiration for entrepreneurs. A great film can be helpful in nurturing your ideas, thought process and can be a true source of inspiration for you to get started. A good move can stimulate your mind and help bring imagination, originality, vision, and flair to your role.

Today, in this post you will find best movies for entrepreneurs that can inspire and motivate you get started with your journey of being a great entrepreneur. Movies are not just pure entertainment, they can guide you, help you gather new ideas to work around things, set high standards for your venture, learn the basics of business and how to tackle initial failures.

List of 26 best movies for entrepreneurs for inspiration and motivation:

There are hundreds of movies that were made in the past about successful entrepreneurs and their journey to success but we have listed 20 best movies for entrepreneurs for inspiration and motivation. Every entrepreneur should watch the movies on the list below.

Trailer of Pirates of Silicon Valley

A biographical look at the men who made the development of personal computers possible and what it took to build up the global corporate empires of Apple Computer Corporation and Microsoft Inc.

A movie depicting one of the greatest business rivalries of modern-day: Steve Jobs and  Bill Gates during the development of the personal computer.

The Startup Kids is a documentary film about internet entrepreneurs in the United States and Europe. It contains interviews with the founders of Vimeo, Soundcloud, Kiip, InDinero, Dropbox, Foodspotting and many others who talk about how they started their company and their lives as an entrepreneur.

It is a documentary film about the history of Silicon Valley and the rise of Venture Capital. The movie tells the story of the creation of an industry that went on to become the single greatest engine of innovation and economic growth in the 20th century. It is told by the visionary risk-takers who dared to make it happen such as Tom Perkins, Don Valentine, Arthur Rock, Dick Kramlich and others. It is one of the most inspiring movies of all times about entrepreneurship.

Startup.com is a documentary film released in 2001. It was about the dot-com start-up govworks.com, which raised $60 million USD in funding from Hearst Interactive Media, KKR, the New York Investment Fund, and Sapient. The startup failed but it left behind some very valuable lessons which became the subject of the movie, govWorks. The company failed during the dot come bubble 1999 – 2000.

This movie is about real-life entrepreneur Joy Mangano, inventor of the Miracle Mop and Huggable Hangers. The movie shows how Joy overcomes immense personal struggle to go on to patent more than 100 inventions and make millions as a successful seller on Home Shopping Network’s QVC.

Beyond the business success Mangano enjoys, The movie tells the story of the power of a supportive family, the challenges a woman has to face in business and the success a product can achieve if it addresses a real need.

The documentary is about the disastrous Fyre music festival on a posh private island, but it failed spectacularly in the hands of a cocky entrepreneur that essentially stole people’s money and left them stranded on an island with meager food and shelter accommodations.

Facebook’s success story is incredible and inspiring if you are looking to be an internet entrepreneur. Zuckerberg doesn’t emerge from the movie looking like a hero, but in real life, he’s the world’s youngest self-made billionaire, and Facebook boasts an impressive 2.27 billion global users.

It is based on a true story of Jordan Belfort. The film tells the story of Belfort’s drug-fueled, money-making ride to the top, and his crime-ridden fall back that ends in a prison and a surprising second act.

A swindler can hardly be anyone’s role model but Belfort’s guile and cunning intelligence show money shouldn’t be the only driver for success in life.

The character Brockovich is played by Julia Roberts. The never-say-die attitude of Brockovich in the face of relentless opposition can be an inspiration for any entrepreneur. Think the whole world is against you? Brockovich shows there’s always a way to fight back. The film embodies female empowerment and underscores the importance of sticking to one’s scruples even in the face of obstacles. It touches upon themes like social responsibility, sustainable business models and gender biases in business.

Another acclaimed movie, Catch Me If You Can is an interesting movie that shows how a successful con artist Frank Abagnale (Leonardo DiCaprio) deceptively charming just about anyone with his skill mastery. Catch me if You Can is based on a true story and is a classic film that exemplifies the entrepreneurial journey. It can teach you how to solve problems creatively, turn bad situations into good and keep pushing yourself forward for success.

Have you ever found yourself pushed to your limits in the pursuit of power and success? Wall Street unravels this theme through the eyes of Bud Fox (Charlie Sheen), an ambitious stockbroker who navigates the economic rollercoaster of Wall Street, adopting the “greed is good” mantra. This movie is a window into corporate finance, portfolio management, investment law principles and capital markets. It is the story of a young, susceptible mind, showing how easy it is to get carried away with the glamorous lifestyle that accompanies wealth.

This movie tells the story of two brothers, Richard and Maurice McDonald, founders of the iconic burger chain, McDonalds and how they turned the burger stand eventually into a fast food chain that dots almost every highway in the United States and worldwide. But it didn’t grow that big by chance — it grew because Ray Kroc partnered with the brothers to open franchises, grew unsatisfied with his contract, and eventually bought out the McDonald brothers to grow the business and become a multi-millionaire.

This movie also teaches us how a simple idea for a product sold at a fair price can explode with popularity.

Jerry Maguire, a character in the film played by Tom Cruise, shows that success can be driven by virtues and values standing against all the odds. With only two people on his side, we see how the little guy can succeed when his abilities are put to the test.

The Godfather trilogy is unarguably the among the best movies for entrepreneurs, highlighting why relationships and building networks are important, why helping people lends itself to good business and why understanding competition is important? The movies are entertaining, packed with thrilling and thought-provoking scenes that would definitely help you prepare for your next business challenge.

It is among those perfect movies for entrepreneurs that are marketing savvy or wants to learn a few tricks on how to sell just about any product. The film tells the story of tobacco industry lobbyist Nick Naylor who creatively spins arguments to defend the cigarette industry in the most challenging of situations. This is a great movie to watch for those who want to learn a few things about crisis management, corporate communications, PR and negotiation tactics.

The movie provodes insights into today’s startup scene. It is a documentary that takes a revealing look at the startup through the eyes of five founders. A story of passion, fortitude and insanity.

A documentary about the short life and early death of General Motors’ EV1. In 1996 The EV1 was one of the most innovate, environmentally-friendly vehicles on the market. GM developed and killed the electric car.

Some more Movies for inspiring entrepreneurs and about Business Success

If you are an entrepreneur looking forward to build a success business then here’s a list of some movies about business success that you should watch for inspiration:

One of the most inspiring movies for entrepreneurs. If you are really interested in watching a movie about business success then you should watch this movie as it showcases how General Motors, Nissan and Tesla Motors race with each other resurrect the electric car. Two of the biggest automobile companies versus a West-coast startup. Elon Musk, CEO of Tesla Motors, has made up his mind to change the world and make the electric car sexy.

One of the best movies for entrepreneurs for inspiration. It’s an honest, meaningful film which makes the viewer fully invested in the struggles of Chris Gardner. The movie also has a very simple message of ‘Never give up in life’.

The movie teaches us that even having a little bit of hope can lead us to an opportunity.

The story revolves around the simple nature of Forrest Gump and how he proves that you don’t have to be a genius to achieve something. All you have to do is try.

Forrest Gump teaches us to never sink into a place that feels like there’s no hope left.

This movie will teach you that anyone can achieve anything, with persuasion and drive.

Also, It will teach you how focusing on and improving your positive attributes will make you limitless.

The story of Steve Jobs’ ascension from college dropout into one of the most revered creative entrepreneurs of the 20th century who gave the world personal computers, iPhone and iPads.

Harpreet Singh Bedi, a third division commerce graduate, becomes a salesman. After being ridiculed by his colleagues and his boss, he plans to operate a parallel company without their knowledge. The movie tells a story of a salesman, his struggle at his company and how he becomes a successful entrepreneur, challenging the the business of the company where he worked as a salesman.

It’s a movie about a man who built India’s most valuable company ‘Reliance Industries’ with an annual revenue of US $87 billion as of 2019. The movie showcases story of a young man from a village, his struggles as a newcomer in a city and his journey towards building a business conglomerate.

Movies can be entertaining, thrilling, though-provoking and help you unwind. As an entrepreneur it is important that you have creative and meaningful ideas to move forward in your entrepreneurial journey.

Apart from reading books, magazines and doing research on the internet, you should watch few of the above mentioned movies for entrepreneurs for inspiration, motivation and to learn how to overcome challenges in business.

Important conferences for Small Business Owners in the US

Kylie Jenner and the art of Successful Marketing

Interesting Facts about Statue of Liberty

Find the Best Bank for Small Business in the United States

How to grow makeup and beauty products business

Note: Get a Business Website Free with Free emails and success online marketing, All-in-One-CLOUD by ADVANTON. Get Started Free and build a strong Online Presence like other 10000 small businesses.