Home » What is a Credit Union 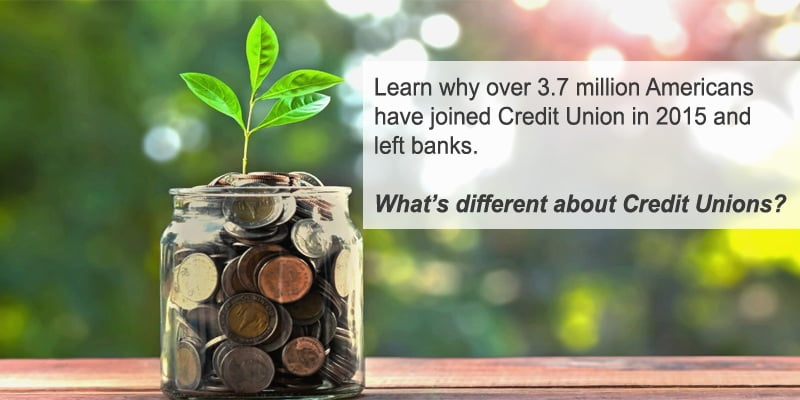 What is a Credit Union and How it works?

In simple terms the customers/members democratically control a credit union and this is how credit unions are being managed until today.

Each member has the right to vote to and elect a volunteer board of directors regardless of their savings or shares in a credit union.

The sole purpose of a credit union is to maximize the economic benefits of its members by providing financial services such as small business loans, checking accounts and deposit accounts at lower fee and better rates.

All Credit Unions have a common mission to help its members succeed financially.

Millions of Americans to date have borrowed loans from their credit unions to finance their car, home or a child’s education as it is extremely affordable to them compared to a bank loan.

History of Credit Union in the United States

What is a Credit Union how it differs from a Bank?

Credit unions also work like banks. They offer deposit accounts, checking accounts, credit cards and offer loans but at much lower rates compared to the banks. Becoming a member of a credit union is simple and easy.
However, membership requirements are based on your occupation, area where you live, causes or associations that you are involved with.
Since Credit unions are not-for-profit institutions they do not have stockholders that receive any compensation or quarterly dividend and this enables credit unions to pass on the benefits to its members by keeping the fees low and lower interest rates on small business loans.
Speaking in simple terms as a member of a federally insured credit union you can expect much better services compared to a big bank because they are not-for-profit financial institutions the net income is applied first to adequacy requirements and then the excess surplus is managed by offering higher interest rates on savings and lower interest rates on loans.
Normally, you have to pay a onetime membership fee and make a deposit of up to $25 if your membership is approved with a credit union.
Also, there’s zero to very low monthly maintenance fee on checking accounts offered by credit unions compared to the banks. However, only a member can deposit or borrow funds from a credit union.

Benefits of joining a Credit union

There are plenty of reasons for joining a credit union as a small business owner or an individual. Being a member of a credit union you save a lot of money.

You may find large banks advertising often about their nationwide ATM network and thousands of easily accessible branches and in order to level the playing field Credit Unions have formed associations among themselves to provide improved services to the members.

CO-OP Financial Services is one such credit union owned interbank network in the US that provides ATM network and shared branching services to credit unions across the United States, with few locations in Canada and US navy bases.

The first CP-OP network was established in the year 1981 when 20 credit unions across California had united their 32 ATMs.

The other Associations such as WOCCU (world council of credit unions) play a significant role in assisting and integrating credit unions and other related institutions for the economic and social development of the people and communities.

SBA (Small Business Administration) USA also has tied up with the Credit Unions to empower local entrepreneurs and local start ups to provide Small Dollar Loans to empower them financially.

Is Credit Union for You?

Whether you an individual or a small business owner a credit union can be beneficial to you over a bank when it comes to savings, better rates on loans and higher interest on deposits.

Even if you are a customer of any of the banks you can apply for a membership with a credit union in your area and reap the benefits of both when it comes to your financial and banking needs.

A credit union is a good choice for Small Business Owners considering the Small Business Loans that available at much lower interest rates that can help you cover your working capital needs or equipment and inventory purchase requirements and the repayment tenure is also much flexible compared to the banks.

Check with your nearest Credit Union branch today to find out more about their membership requirements and take a better step towards financial freedom.

Learn more about Best Bank for Small Business Banking in the United States.

Guide to find and buy cheap government Surplus in USA

Learn Where you can find small business grants? 8 great sources.

Join Free today to empower your Small Business and generate 100% income every month.