Are you interested in starting a Convenience Store business and want to buy a Wawa Franchise? If yes, then in this post you will find complete details about Wawa Inc. and the exact cost to open Wawa franchise in the U.S.

Wawa is an American chain of convenience stores and gas stations that serves the Mid-Atlantic region of the United States and Florida. The company operates their stores in Pennsylvania, New Jersey, Delaware, Maryland, Virginia, Washington, D.C., and Florida. As of 2018, Wawa operated 600 fuel stations throughout the United States, while the company had only 483 fuel stations in 2016. 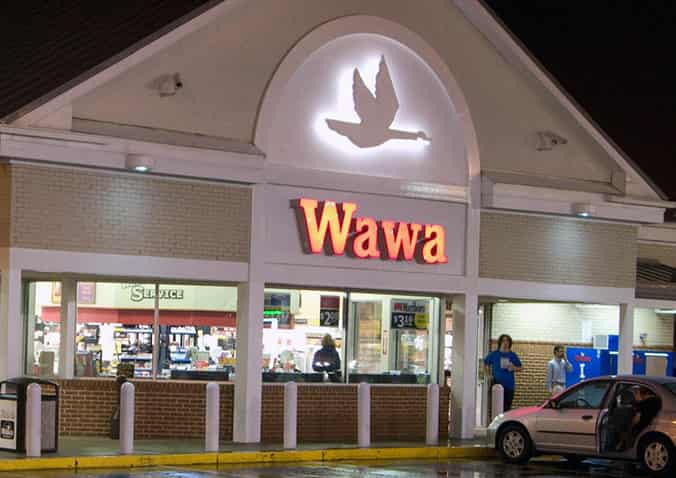 Wawa offers products found at most convenience chain marts such as chips, drinks, and soda beverage. Wawa also sells its own branded iced tea, orange juice, and milk. Wawa used to sell its own branded soda but it has been discontinued. Wawa has Coca-Cola Freestyle soda fountains. Company’s key products include a variety of coffee, latte, and cappuccino flavors and sizes, and made-to-order hoagies. Wawa also offers a brand of hot breakfast products, most famous of which is the “Sizzli”, and also a full deli with touch-screen ordering of sandwiches, hot sides, drinks, and deli meats. Wawa sells alcohol in Florida, Virginia, and at one Pennsylvania location in Chadds Ford.

Is it possible to open a Wawa Franchise? No, Company’s website states that, ‘Wawa does not offer franchise stores.’

Wawa, Inc., a privately held company, that was founded in 1803 as an iron foundry in New Jersey by George Wood. Toward the end of the 19th Century, George took an interest in dairy farming and the family began a small processing plant in Wawa, PA in 1902. At that time, milk business was a huge success due to its quality, cleanliness and “certified” process. The home delivery of dairy milk declined in 1960’s and Grahame Wood, George’s grandson then opened the first Wawa Food Market in the year 1964 as an outlet for dairy products.

Today, Wawa is your all day, every day stop for fresh, built-to-order foods, beverages, coffee, fuel, and surcharge-free ATM’s. In July of 2015, Wawa was named ‘America’s Most Beloved Convenience Stores‘ by a Market Force study of 7,000 consumers, winning with the highest “composite loyalty score” of 68 percent, and taking first place in the fresh food category.

A chain of more than 800 convenience retail stores out of which 450 offering gasoline, Wawa stores are located in Pennsylvania, New Jersey, Delaware, Maryland, Virginia and Florida. The stores offer a large fresh foodservice selection, including Wawa brands such as built-to-order hoagies, freshly-brewed coffee, hot breakfast sandwiches, built-to-order Specialty Beverages and an assortment of soups, sides and snacks.

The company’s comes from the town Wawa in PA. The name Wawa was derived from the Ojibwe word for the Canada goose (taken from The Song of Hiawatha). An image of a goose in flight serves as the Wawa corporate logo even till today. Wawa offers fresh food items to its customers which make them the top fresh food provider among its competitors in the Mid-Atlantic region of the United States and Florida.

The Secret of Wawa’s 50 Years of Success

Wawa operates in the Convenience Store Industry such as Gas station, Retailing, Petroleum products and Fuels. Unlike supermarkets, grocery stores and retailers that primarily have store sales of groceries and other daily use items, Wawa is known for its milk products that are offered to the shoppers on the go. For convenience of the customers, Wawa also offers a mobile app for online ordering and checkout facility.

Its current CEO and President is Christopher Gheysens. Wawa reported annual revenues of US $12.1 billion in 2018 with a total employee strength of 34,000. Wawa ranked number 25 on the Forbes list of Americas largest private companies in 2019.

In April 2016, Wawa Inc. and Comcast collaborated to start offering free wifi to the people who visit the more than 700 Wawa stores in Delaware, Florida, Maryland, New Jersey, Pennsylvania and Virginia

Cost to Open a Wawa Franchise and Requirements for a Franchise

Wawa was started as a milk processing and delivery business in the year 1902 and at that time milk business was a huge success, due to its quality, cleanliness and ‘certified process’. The company started delivering milk to homes as a way of penetrating the market but in the early 1960’s milk delivery business witnessed a huge decline and the company

A chain of more than 850 convenience retail stores (over 600 offering gasoline), Wawa stores are located in Pennsylvania, New Jersey, Delaware, Maryland, Virginia, Florida, and Washington, D.C. The chain’s name comes from the site of the company’s first milk plant and corporate headquarters in the Wawa, Pennsylvania area.

Wawa is a 54 years old family owned business with a revenues in excess of $12 billion which is still expanding rapidly and ditching gas and cigarettes for kale salads and nerdy coffee.

We hope this post will help you figure out how to open a Wawa Franchise and how much is the cost of opening a Wawa Franchise. In future we’ll come up with more updates so keep checking back. Also, our team is working on creating relevant content about C stores, Couche tard, supermarket, fueling industry, mart, and service station.

Other useful resources for Entrepreneurs and Small Business Owners

What is Product Line Pricing Strategy?

How to Start CAD Business

Cost of Starting a Trucking Company

How to calculate working hours in a year

Bed Bath and Beyond Closing Stores