Are you a chocolate lover or dream of starting your chocolate store someday? Then continue reading this insightful post about how large is the chocolate market United States? 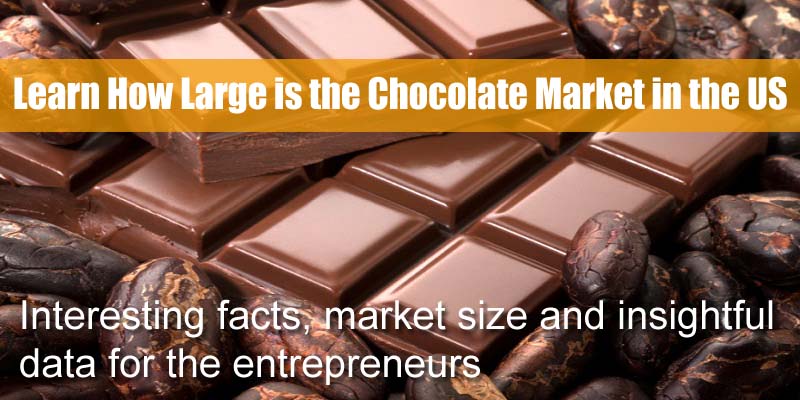 How Large is the Chocolate Market United States?

Chocolate Candy remained the favorite among U.S. consumers in 2019 as its sales stood at US $11.32 billion which was more than double that of non-chocolate variants.

Chocolate is among the most favorite flavors of american consumers and an ongoing research continues to demonstrate the health benefits of chocolates, further boosting its appeal.

As per the survey conducted by consumer research firm Packaged Facts it was found that nearly 80% of U.S. adult consumers eat chocolates.

According The National Confectioners Association reports that 52 percent of Americans claim chocolate as their favorite flavor.

The National Institute of Mental Health has indicated that the anxiety disorders are affecting 40 million adults in U.S., which comprises 18% of its total population.

Consuming chocolate boosts brain serotonin and acts as an anti-depressant. It also releases endorphins in the body, which has a feel-good effect. These factors are expected to drive demand in U.S. for chocolates.

Chocolate market in the United States has been consistently growing over the past few years.

Some interesting facts about the Chocolate Market United States

The demand for sugar free, premium and dark chocolates is on the rise among customers. Additionally customers are looking for chocolates with antioxidants.

The Packaged Facts survey found that 48% of U.S. customers bought dark chocolate in the previous year.

Chocolate sales is on the rise year-on-year during the Halloween season. Chocolate candy is the top selling Halloween treat.

In fact, the top four marketers of seasonal Halloween chocolate account for almost 98% of the segment’s dollar sales.

Around 30% of the consumers bought chocolates online in the previous year. Customers purchase chocolates and candies on amazon and other online chocolate stores.

Let’s have a look at the Global Chocolate Market

Chocolate Market United States is growing very fast and entrepreneurs looking to try their luck in the chocolate industry can benefit from the report.

There are hundreds of chocolate brands in USA and each one of them has a unique taste and texture but in the list below you will find the finest chocolates in USA that you must try.

Lindt is a Swiss chocolate company founded way back in 1845 and known for its chocolate truffles and chocolate bars, among other sweets. You will find lindt in almost every part of the world from airports to chocolate parlors, hypermarkets to exclusive lindt cafes that offers chocolates and mouth watering desserts. One of the most popular chocolate from Lindt is Lindor which has a hard chocolate shell and a smooth chocolate filling.

Most of the US Lindor truffles are manufactured in Stratham, New Hampshire.

CocoArt Chocolate is from New York and they are famous for their high quality artisan chocolate truffles. Started 8 years in New York, you can order their chocolate truffles online that come in 8 different flavors, arranged in a beautiful chocolate gift box.

If you are a chocolate lover or looking to impress your fiancee, wife or boss then chocolate truffles box is worth ordering. Free delivery is available across USA.

Milton S. Hershey opened a candy shop in Philadelphia in 1873 and that was the beginning of the brand. There are so many popular Hershey’s chocolate products such as Hershey’s chocolate bars, KitKat, Reese’s Peanut Butter Cups, Almond Joy, and York Peppermint Patties.

Some of these are Hershey’s original products, and others have been acquired by the company over the years. If you are not a big fan of chocolates still you can visit Hershey’s Chocolate World for a one-of-a-kind experience.

Godiva is among the oldest and most popular chocolate brands in the world which was founded in 1926. Although its a Belgian chocolate company but very popular in the US that sells tender, sweet chocolates which is available in variety of flavors. Godiva also makes chocolate truffles, cocoa, shakes, chocolate liqueur, chocolate-covered snacks, and coffee.

No list of the best chocolates in US can be complete without including Mars. This incredibly famous worldwide brand is the maker of Snickers, Galaxy, Dove, M&M’S, Milky Way, Twix, 3 Musketeers, and the popular Mars bars. Mars products are mainly candy bars and confectioneries instead of plain chocolate products. But it definitely offers a combination of chocolate, nougat, caramel, or other ingredients that are equally delicious. Mars is a family owned business and the company is headquartered in McLean, Virgina, US.