Home » Best Tattoo Artists in the World in 2020

A tattoo is a form of art where ink, dyes, colors or pigments are inserted into the dermis layer of the skin and some design or graphic is created. It can be permanent or temporary based on the individual’s choice. Many people say that tattoos a way of expressing ones inner-self. Tattoo artists do a wonderful job by creating beautiful designs on human bodies but do you know which are the best tattoo artists 2020 in the world? 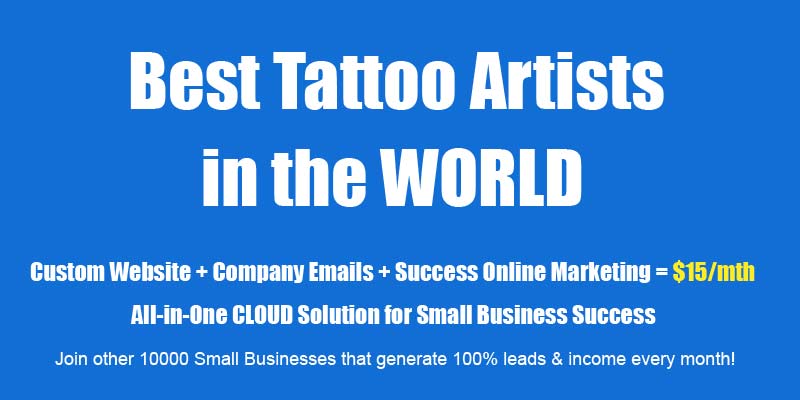 Skilled professionals create tattoos on various body parts of the people that are known as tattoo artists. Since, tattoos are highly popular in every major economy of the world; it has made tattoo artists extremely rich and popular among people.

List of the best tattoo artists 2020 in the world

Frank Carrilho – Toronto, Ontario, Canada – A very popular tattoo artist from Toronto, Canada who loves to play with sketches and his tattoo work reflects the same. He’s very popular on instagram as well and prides himself on not following any rules as far as his tattoo designs are concerned.

Carolyn Elaine – Chicago, USA – Another best tattoo artist in USA, Carolyn works at the Mayday tattoo Co., a tattoo shop based in Chicago. Carolyn featured on season 8 of Ink Master and she specializes in neo-traditional wildlife tattoos.

Inal Bersekov – Canada – Originally from Belgium, Inal is Drake and his OVO crew’s personal tattoo artist. His tattoo work reflects portraits of famous personalities such as Muhammad Ali, Will Smith and Justin Bieber.

Mirko Sata – Milan, Italy – Mirko sata focuses on serpentine designs such as a snake that twists around hands, arms, at the back and legs. The yin yang snake tattoo was actually the most popular tattoo of 2016.

Lewisink – Paris, France – He is a well known tattoo artist from Paris who focuses on Mathematical and geometric patterns. His works with dots that are entirely in black and grey pattern, partially because he believes that dots age better than lines and that high contrast makes a tattoo last better.

Harishow – Fukuoka, Japan – Based in Japan his work reflects traditional Japanese subject matter with bold color and people love the details in his tattoos.

Rob Kelly – Hong Kong, China – He is based in Hong Kong and works at the Blackout tattoo studio that he started in the year 2010. His work reflects a mix of new-school color and traditional line value.

Lauren Wizner – Sydney, Australia – Lauren is a tattoo artist at Hunter & Fox Tattoo in Sydney, Australia and she is famous for his cartoon-inspired designs, colorful and delicate hand lettering. Her brilliant approach to using colors in her tattoo characters and designs is what makes her unique.

Stephanie Tamez – New York, USA – Stephanie learned the art of tattooing in San Francisco in a private studio after which she moved to New York and started working at the Saved Tattoo studio. She’s a well known tattoo artist.

Ami James – Miami, Florida, USA – Ami James is one of the most popular tattoo artists in the world. He’s also among the best tattoo artist in USA, an entrepreneur, TV personality and co-founder of Love Hate Tattoos parlor based in Miami, Florida. He co-founded an online platform for getting a custom tattoo design called “tattoodo” in 2013. Ami works with all kinds of custom tattoo designs and patterns.

Valerie Vargas – London, England – She started Tattooing in London in the year 2007. After working for 7 years, she and her husband started their own Tattoo studio Modern Classic Tattoo in 2014. Her work reflects western western traditional style with an emphasis on figurative work and fine line black and grey.

Paul Booth – New Jersey, USA – Paul is a well known tattoo artist in the world and besides being an established tattoo artist he is also a musician, painter and a film maker. He has earned a name for himself through his dark and gothic style of tattoos that he had developed from his own experimentations and designs.

Michael Taguet – Saint Chamon, France – With several awards for his unique tattoo designs that look like photographs, Michael is one the biggest names in the French tattooing world and among the most popular tattoo artists in the world.

Gerhard Wiesbeck – Germany – A well known tattoo artist from Germany who specializes primarily in blackout tattoos where the skin is left blank in a pattern rather than tattoo being the pattern.

Rit Kit – Passage, Kiev, Ukraine – She is one of those tattoo artists that used the actual leaves to create the very stencils of the tattoo she was about to do due to which she became highly popular in 2017. Now, this is something unique and interesting when it comes to tattooing.

Kat Von D – Los Angeles, USA – Kat Von D has a list of top notch celebrity clients such as Rihanna, Lady Gaga and John Mayor to name a few. She does more than just tattoos, she’s a musician, an artist, a model and an entrepreneur. She works at her private tattoo studio called High Voltage Tattoos based in Los Angeles.

Bob Tyrrell – Michigan, USA – Working at his own tattoo parlor in Michigan he has earned a name for himself in the tattoo business. He’s a well known tattoo artist in Michigan among the locals and tourists that come to his parlor for trying his unique tattoo designs in dark and grey, giving his tattoo designs a realistic and sharper look.

Scott Campbell – Los Angeles, USA – He is the most famous tattoo artists in the world and has a private tattoo studio in Hollywood. His clients include Heath Ledger, Sting, Orlando Bloom and Courtney Love to name a few. He also got a chance to work with the great Louis Vuitton himself for a short period of time.

Tattoos are not just a piece of body art anymore for people, it has become a way of expressing their thoughts, feelings, emotions, opinions, faith and desire. While, getting a simple tattoo on your body is not that expensive but it can cost you a few thousand dollars if you are looking to experiment with something unique and distinct.

Note: Generate 100% income from your small business by building a strong Online Presence with a Free Business Website, Free Company Emails and Free success online marketing. Join the league of over 10000 successful small business owners. Get Started Free with ADVANTON.